Limited Edition Kickstarter Box is a Love Letter to Games 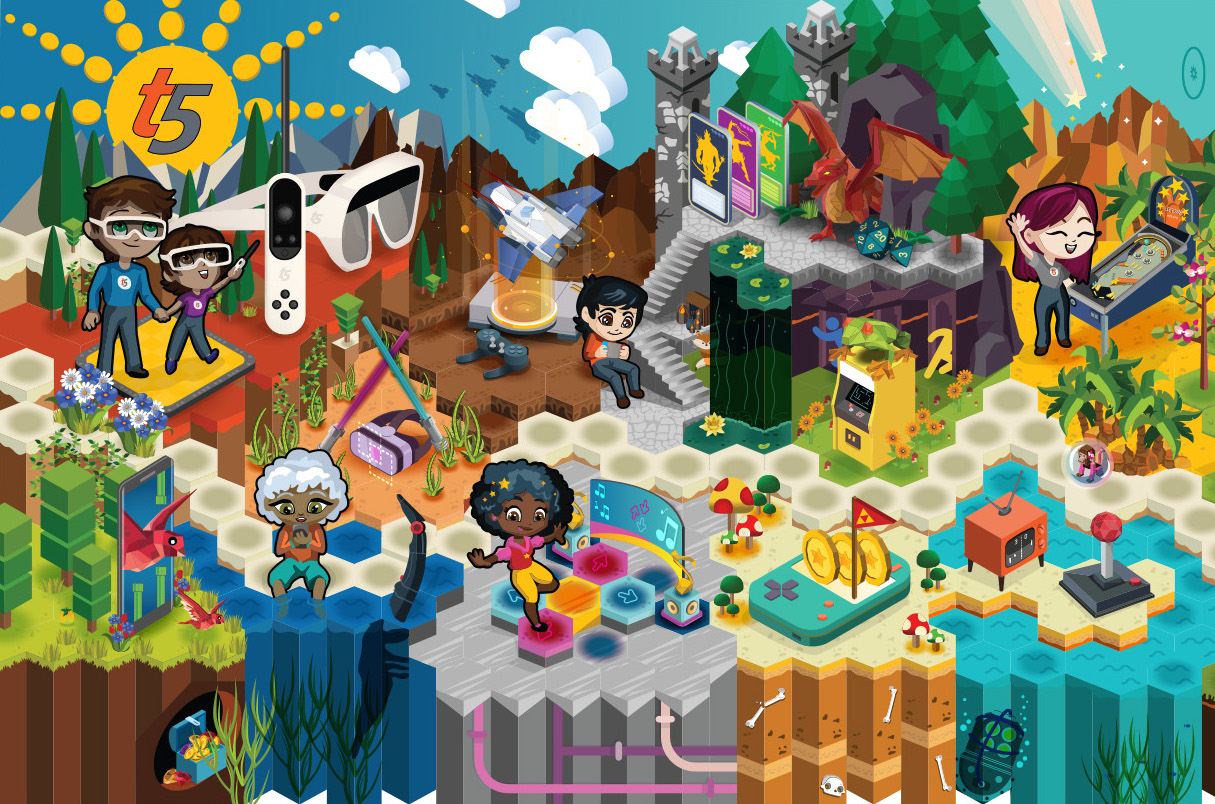 While Tilt Five ushers in a new generation of game night, we proudly stand on the shoulders of developers who were designing games before the pyramids were even built!

In fact, did you know that humankind developed board games before they had even created a written language?

Throughout the centuries we have seen countries, cultures, and dynasties come together around games, from Senet (3500 BCE) to GO (2000 BCE) we have gathered our rocks, dice, and meeples for a friendly game night.

In honor of the game makers who came before us, we designed a limited edition Tilt Five box for those Kickstarter Backers who pledged to receive an XE Kit or and XE Group Pack.

Artist, entrepreneur, and XR-designer Kari Snyder offered to design a box cover for her fellow T5 Kickstarter backers that would tell the story of the many social games that came before us, including the consoles we fell in love with, and the characters and symbols that we continue to carry from our childhood.

“I am a firm believer that packaging can do more than one thing. For the design of the T5 special edition box, outside of a visual illustration of board game history and communicating basic product features, I worked in a mini-game of finding hidden references to video games,” says Kari who teamed up with her daughter Anastasia for the project.

Their signatures sit proudly on every box, which has been embossed and decorated with gold foil! Once these beautiful boxes are distributed, that's it... the design will be history... history will become legend... and legend will become myth!

“One major challenge was working with the T5 team to select which games to work into the timeline of game history. Not so easy considering there are numerous ancient games to choose from, let alone hundreds of modern games,” Kari continues.

Sooo... we've charted about 51 references to games throughout history, all nicely crafted and Easter-Egged into this beautiful mural!

Some are right there in front of your nose (uhm... darts, anyone??) – but there are some VERY subtle nods to iconic video games featuring creatures, locations, spaceships, and shapes. There's like 45 years of video games hidden throughout!

Also a special thanks to Dr. Sally Applin, anthropologist extraordinaire, whose qualitative research revealed the importance of legacy gaming to us and our fans. Back in 2020, we teamed up with Dr. Applin to explore Tilt Five's branding and packaging. Dr. Applin recalls that, "There was an opportunity to integrate Tilt Five's personality into the packaging—and the research revealed their desire to make a 'Valentine' to their Kickstarter backers. These artists [Karen and Anastasia] really made something stunning for this special Limited Edition --it's a beautiful tribute to the global legacy of gaming."

We hope you love the box art as much as we do! It is now proudly displayed in our front lobby.