Dungeons & Dragons: How to Run a Campaign on Tilt Five 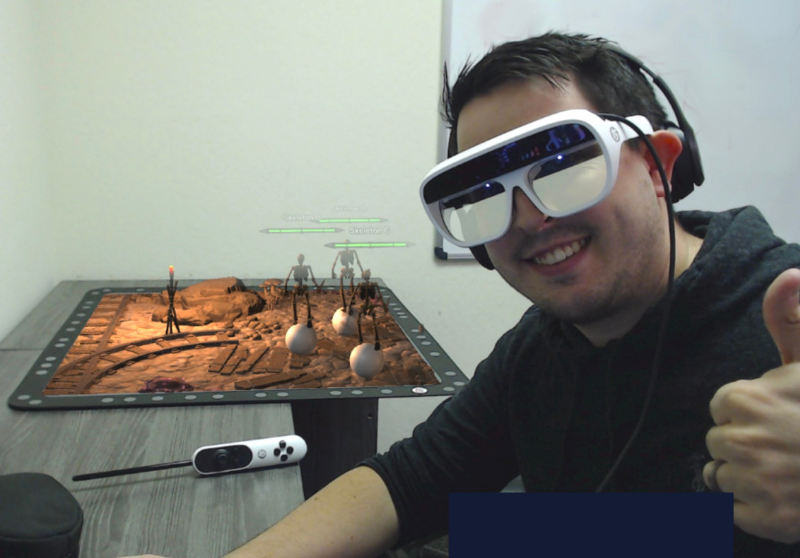 Dungeon’s & Dragons is a beloved tabletop roleplaying game (RPG) that immerses players in worlds of swords and sorcery.  Driven by the players’ imagination, the game comes to life as the Dungeon Master (DM) sets the tone and describes everything from the dark forests to the battles at hand. They invite the adventurers to react to the challenges and the scenes around them… How will they fare?

Justin Lang, Software Engineer, is Tilt Five’s resident DM and breaks down how he has been building maps and running Dungeons & Dragons campaigns using Tilt Five.

Tilt Five offers a unique way to experience D&D and other tabletop RPGs!  Battlemaps, combat, dungeons, and interactive encounters move to a new level when brought to life in full 3D on the Tilt Five system. While there are other solutions that bring your world to life–like Dwarven Forge tiles sets and hand-crafted terrains– they tend to present the same challenges: reusability and customization.

With a given Dwarven Forge tiles set, map creators are somewhat limited in the environments they can design. If they build an environment with a sewer tile set but the party begins to wander into the into the wilderness, you quickly find yourself having to get more and more sets to cover all of the terrain needed. I often find myself resorting to drawing out symbols on large dry erase mats to represent combats because I don’t have enough materials to create all the encounters I dream of.

This is where some of the tools that Tilt Five has available come in handy. With Battle Map Studios, dungeon masters can create customized maps and encounters while maintaining that 3D experience on the table in front of you.

For the final battle of a campaign I ran last year using Battle Map Studio, I created a series of encounters set inside of a volcano. It featured precarious bridges over pools of lava, lavafalls flowing from the ceiling, and enormous statues. This setup was the perfect environment for a battle with an enormous fire elemental lord.

Being able to quickly create these environments for my players was an incredibly rewarding and satisfying experience. I was even able to use my own miniatures for the fight. One of the greatest limiting factors of these systems typically is not being able to use your own assets.

However, with Battle Map Studios in particular, they just recently added the ability to import 2D assets into the world, opening up a whole host of possible encounters. Overall, using this map editor and RPG sandbox was a very interesting experience, and well worth the try. I don’t know if I’ll always have the time to set up complex encounters for every situation using Battle Map Studios, but I’ll certainly keep it in mind as an opportunity to elevate my players' experiences to new heights.

In March, the Tilt Five team attended the JoCo Cruise to showcase the system and run a couple of D&D one-shots with guests. With no access to the internet I had to run everything off of a local router. So, for this event I attempted to create a custom engine in Unity instead.

It was essentially an interactive scene viewer, wherein networked players could move their characters in the environment, while I, as the DM, could spawn in enemies and move them around the gameboard. Traps could be triggered by players and possibly my favorite feature, customized views for each player!

An often-cited challenge of DMing is that hidden or information only available to a specific player is difficult to convey in a D&D group session. When a player searches a room for traps, the DM is left with either the option of telling the whole group what the individual player sees at the table, or stepping away from the group to share this secret information. Neither of those feel like particularly desirable paths, especially given the capabilities of the Tilt Five system, which is what drew me to using this custom engine.

Because of the way Tilt Five handles projected views and the way it avoids visual interference, I could create objects that are visible in the 3D space only to certain players, and enable or disable their display for different players based on the circumstance. If a player wanted to search the area for traps, depending on how well they rolled, instead of telling them what they saw, I could just silently show them without sharing it with the other players. That person would then be responsible for warning their allies which floor tiles might be dangerous to step on, or where the tripwire that would set off a boulder trap was.

Ultimately, the biggest challenge in creating a single 1-hour one-shot was the development time. While there are limitless assets available, actually finding them and implementing them took approximately a week. Even with the engine itself in place, each trap and possible avenue of the encounter had to be accounted for, a feat which could very quickly spiral out of control.

One major downside of using Battle Map Studio or creating a custom engine came down to the amount of time you needed to invest in the development of the map. Nothing quite compares to the ease of drawing out a map 10 minutes before a session starts, but given the situation where you have enough time to build out a few maps, I find the environments created, and the effects experienced in a group setting around my kitchen table are parallel to none. I’m already working on plans for when I can next introduce some of these tools to my ongoing games!