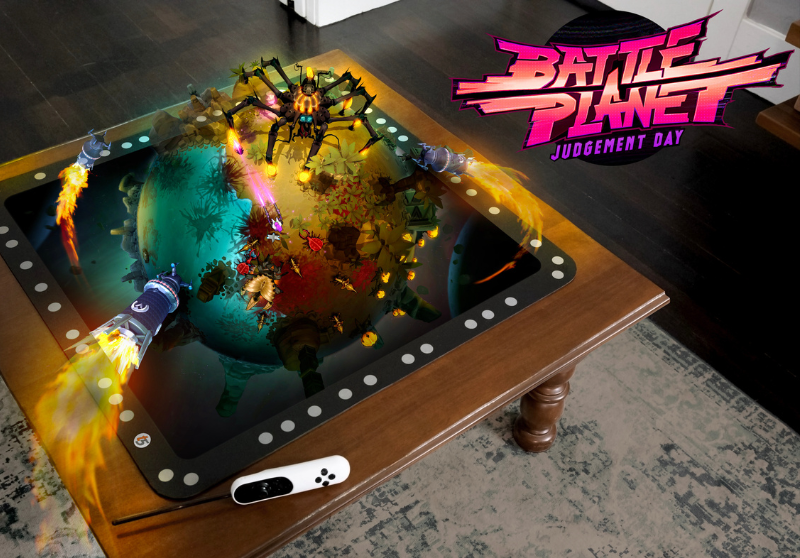 We always enjoy blasting our way through Battle Planet –Judgment Day, the rogue-lite SciFi arcade shooter from THREAKS! The award-winning video game studio based out of Germany took their adrenaline-charged, non-stop action game and brought it to Tilt Five.

Check out what the THREAKS team learned about the development process when adapting Battle Planet –Judgment Day for the Tilt Five system.

What was the production process for you and your team? What did you learn?

First of all, the goal was to see the game in action on the gameboard.

With the nature of our game’s visuals, being rendered on a sphere, we knew that the camera setup and the scaling and positioning of content would be key to make it shine on the platform.

Getting the game running on Tilt Five

The initial setup of the project on the platform went really smooth and fast - we integrated the basic setup of the SDK, following the documentation, ran a new build and observed the results. We quickly saw what would be possible and took it from there!

A lot of our solutions and problem solving were probably specific to our game - for instance, since we were planning to integrate Tilt Five support into the same SKU, we essentially copied all our game scenes and prefabs that required Tilt Five specific setup. This means a bit of an overhead when it comes to maintenance but it also allows us to completely separate the new logic from the old one, minimizing risks of bugs between the two versions.

Once it was up and running, we had great fun experimenting with the various features and possibilities of the platform. Probably the only hiccups we had were due to early hardware access, but we had great support from the Tilt Five team to walk us through all of them!

When the game launched on Tilt Five the first time, it was intriguing but we felt something wasn't quite right. The planet sphere looked cool and rotated in 3D space, the player character popped visually and looked like a little miniature, and the shooting and splatter FX felt great… but still something was wrong.

After the first bits of tweaking it became pretty obvious… It was all about the scaling and the view alignment. We tweaked and iterated for quite some time to get the game graphic’s size, distance of the camera and rotation alignment right, and it literally improved the visual game experience by at least 50%... It just looked amazing at some point!

Since our game has a very specific playfield and feel to it there is no rule of thumb here though, and we can only recommend spending a good amount of time on those aspects since they can have such a huge impact on the final results.

Adjusting the UI for Tilt Five

The Games UI required a completely different setup, hence the placement and scaling was changed in order to work with the view on the board and in our case, to give that desired feel of 3D space and depth. We have been setting up prefab variants from all our UI screens and elements in order to be able to work on those independently of the desktop version. Once Tilt Five is activated, only the designated UI is displayed.

In order to achieve a great look and feel of the UI elements each and everyone of them has been tweaked and aligned with the players view. Font and screen sizes were adjusted for better readability and all UI elements have been placed and rotated within the 3D space in a way that would maximize the spatial feel of the experience - eg. HUD UI elements hovering above the playfield.

Accessibility
In order to have a smooth first time user experience for Tilt Five Users we added a couple of onboarding and operation features. Things such as an info pop up (also displaying the best view angle for the game) when the glasses get plugged in while the game is running, additional options for controls and visuals, as well as fall back solutions for when the glasses disconnect etc..

The focus for us always is to achieve the most immersive gaming experience possible. This requires clear readability of the visuals, juicy and direct feedback for the player, and an undisturbed game flow. Guaranteeing those aspects for Tilt Five might need some individual design solutions and tweaking depending on the mechanics and the game itself.

Defining what’s most relevant in order to achieve the game experience you’re aiming for should be leading the focus in development.

What made you want to integrate Tilt Five into your video game?

Battle Planet is initially coming from a VR platform, has been brought to mobile AR previously and then became Battle Planet - Judgement Day, as a PC and Console game. We liked the opportunity of bringing our evolved version of Battle Planet back to a new and exciting AR platform and thought it would be a great fit for Tilt Five because of its 3D spatial design.

Do you have any tips for developers who are interested in integrating their existing game or building a new game for Tilt Five?

That would mainly be what’s mentioned in terms of our learnings. If we were building a new game for Tilt Five, we would definitely have our focus on the platform specific aspects and features. Experimenting with the very specific view on the game’s environment/ playfield, platform specific controls and building mechanics that are designed around those.

What was it like to see your game on the Tilt Five system for the first time?

Amazing - we had it up and running rather fast and then took the opportunity to enjoy our very own holographic game! We’ve been intrigued by that spatial miniature feel of our characters on the playfield. It felt a little like coming home, because of the game’s AR background.

What games or experiences are you looking forward to trying on the Tilt Five?

Personally, I would love to see games specifically made for Tilt Five to tailor to its Hardware and use case, something that could not exist on a regular PC or gameboard. Off the top of my hat, I could think of a game for instance, where the different players see different things and need to cooperate in order to solve the puzzles of the game (as a simple example: Player A can see a door they need to pass. Player B seeing the same room, does not see the door but is capable of seeing a key object. By working together, they can acquire the key and unlock the door and proceed).

Is there anything else you want to share or include?